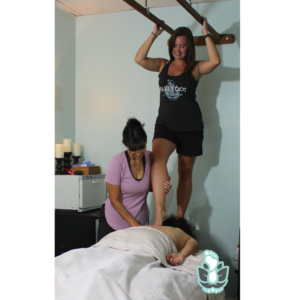 Training more barefoot Ashiatsu massage instructors was the answer. But that too, was going to take some time, and it would not solve the problem of LMT’s in remote areas. It needed to be a two-fold plan. Train other instructors and create a home study to meet the need of massage therapists until Ashiatsu trainings were available to them. The Ashiatsu Bar Massage home study took two years to put together. A daunting project that was not without mishaps. Since it had never been done, there were not a lot of guidelines. After filming it three different times in three different locations, I was finally satisfied with the video. They say the third time is the charm. This instructional video and manual had to be spot on. It had to be easy to read and understand without having a lot of confusing directions and terminologies. After two years, we launched this labor of love. It was then followed by Ashiatsu Floor, Fijian massage and Bamboo massageTen years have passed, and it is still going strong. Next was to decide what the criteria for teaching would be. I didn’t want to Lord over instructors and then take a percentage of what they made. Besides, that is kind of what a franchise is. If you are working for a company that is taking a portion of what you make and treating you like an employee, this might be an illegal franchise. You should contact a lawyer. My Ashiatsu massage training was abysmal. The requirement was to travel to three different Ashiatsu traings to watch and help an instructor teach a class. Watching and helping are the same as teaching. I paid attention and tried to memorize what was said as there was no manual with these instructions. When it came time for me to teach the process was very stressful. There had to be a better way. I did not want a franchise, so I went with a license agreement. The agreement would allow other instructors to use Barefoot Masters® educational materials to teach their classes. It wasn’t the most lucrative plan, but it was what I wanted. This method worked pretty well. It was slow going at first. I had those interested in instructor training attend the bigger barefoot Ashiatsu massage classes when I needed help. They would watch and help, but at the same time, I had them teach while using me as a safety net. Since they had a manual it made the transition easier. And it worked pretty well for a while. As the economy shifted, class sizes decreased, and airline restrictions increased. It didn’t make sense to travel anymore. I taught Ashiatsu Bar in my office. The classes were small, but training this way was not only economical but turned out more lucrative in the long run. The cost of taking four to five days off for traveling and paying for advertising took a huge bite out of the revenue. It was fast becoming my new paradigm. Rather than try to fill classes with 8 or more students. The Ashiatsu class trainings we smaller. It was less stressful, and if I enjoyed this, then other instructors could do the same. Massage therapists with a one room office could teach classes in their place of practice. With no overhead and keeping Ashiatsu massage training to 1 – 3 students it would benefit everyone. Student and instructor. We don’t have the biggest classes, but we are the largest barefoot massage provider in the United States. It allowed us to offer more barefoot Ashiatsu massage classes and offer it in more areas. We hope you found this helpful. The next blog will be about how to become an instructor The Barefoot Masters® offers Ashiatsu Live Classes, as well as in a home study and online format. Looking for an Ashiatsu classes near you?