Barefoot massage saved my career after having two frozen shoulders. Ashiatsu and Fijian Barefoot Massage saved my career more than once. The first time was bad enough, but to have it twice! Some years ago, I had an altercation with a cute terrier named Ryan. I watched in horror as the vehicle in front of me hit him. The poor thing lay dead still on the wet asphalt, bleeding through his nose but still breathing. It didn’t look good. No owner was in sight, and the situation looked dire. 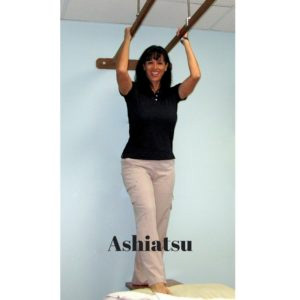 I scooped up his limp little body in a towel. And put him in the passenger seat of my drove off to the emergency hospital. Not the best decision I ever made. Out of the corner of my eye, I saw the dog move forward, so I reached for his collar to keep him from falling. In a flash, he became a Tasmanian devil, emitting an ear-splitting scream. Blood and feces were flying everywhere! As his gnashing teeth sliced through this surreal scene. I knew if I lost control of his collar he would eat me alive or killed in a car accident! All the while my arm and shoulder were being yanked into unnatural ranges of motion. The good news: The dog was fine! The bad news: I wasn’t. A few days later I went to reach back behind me to get something and a searing pain shot through my right arm. Whoa, that’s not okay! Resting it didn’t help. The next thing to do was make an appointment with the orthopedic doctor, who said, it wasn’t a torn rotator cuff. That was good. He gave me a cortisone shot and sent me to physical therapy. The shot did zip, and the physical therapy sent me into blinding spasms. Then I tried exercises that I saw online. It made the pain worse, so I tried two different kinds of massage and cold laser therapy. All failed to make any difference. Back to the doctor, I went. This time I was told I had: Frozen Shoulder aka Adhesive capsulitis. What is frozen shoulder I asked? Stiff shoulder…right? The name doesn’t begin to address the agonizing phases or pain associated with it. The doctor told me it was like having a virus of the shoulder. It was an autoimmune response of the shoulder. It caused it to inflame. And then like a spider-web it would spin scar tissue around the shoulder cap. When that calmed down, the shoulder would then become frozen in place. A year later the scar tissue would all release as if nothing had ever happened. No one knew why it did this. The doctor did tell me that I could wait another 18 months or have the surgery. He said, most of his patients usually opted for the surgery because they could no longer sleep due to the pain. I read everything I could find on frozen shoulder. All the definitions started to sound exactly alike. That’s when I realized it was a canned repetition of the same thing. Frozen shoulder occurs mostly in women in their 50’s. And those with diabetes and those with thyroid issues. Not to be confused with an injured shoulder that has is an immobile state for an extended period. It became clear that the medical field did not really understand it. But somebody must know something that would help. I stumbled upon the blogs people had written about their Frozen Shoulder. Most of them had a similar account as I had. Cortisone shots, physical therapy, and massage. It came down to the same thing. They either decided on surgery or chose to bite the bullet and be or out of work until it passed. But all had agreed, the physical therapy and stretches, it only made it worse. None of these choices was an easy fix. Oh, and I did read that in 50% of the frozen shoulder cases, the patient would have it on the other shoulder 3 to 4 years later. That fact I quickly dismissed. I could not touch the top of my head, and the pain was at 6 to 7 during the day and an eight at night. If I switched, it barefoot Massage and Frozen Shoulder would jump to a 10 of blinding white pain that would have me writhing in pain on the floor. Any more and I would have passed out. I wasn’t getting any sleep, and I was on constantly on edge. Massage with my hands or doing facials was out of the question. I could but still could do barefoot massage. I had accepted a new position as the head esthetician at a Country Club that had me wondering what I was going to do. I could give up the new job and wait a year when my shoulder would resolve on its own or have surgery. After another month of unrelenting pain and no improvement, I was ready to gnaw my arm off for relief. At least with surgery, they would use anesthesia. It was not an easy choice, but I opted for the surgery. The doctor removed the scar tissue arthroscopically. It turned out I had a spur

and a blood clot. Glad it didn’t get dislodged during one of my massage treatments. Eight weeks later I started my new job. I still had another month of grueling physical therapy. But at least I was out of pain, and my mobility had improved. Other therapists I know have had to learn barefoot massage because of an injury. They were able to take the course while recovering. At least Ashiatsu and Fijian gave me a choice. I could not easily brush my hair anymore or do many things that we all take for granted. I became left-handed overnight. It was nice when I could cut my own meat and snap the clips on my bras again. It was not an easy choice, but I opted for the surgery. The scar tissue was removed arthroscopically.

Three years later, right on schedule. My other shoulder started with the familiar symptoms of frozen shoulder. But, I was not taking any chances. I saw the doctor right away. Being very flexible, I could still reach behind my back. He didn’t think it was a Frozen Shoulder, whew! It was not my imagination, and I did not want to go through this again. I went to see my physical therapist, and he said if I did the physical therapy it would not happen again. Sorry to say he was wrong, the doctor was wrong and I was fast becoming one of the 50% who gets it in the other shoulder. Frozen shoulder is a total mystery. And I will likely ever get it again. I thank God I only have two arms and not three.

At least it was my left arm this time and, maybe I could weather through this one. As the pain Barefoot Massage and Frozen Shoulderintensified, I desperately scoured the Internet for new information. Surely there was something new by now. I came across a clinical trial for a frozen shoulder that used Xiaflex. For years, Xiaflex was used for Dupuytren’s contracture. Dupuytren’s contracture is when the fingers of the hand develop a node and begin to pull the digits toward the palm. They believed it could be used to help with frozen shoulder. Xiaflex is an enzyme that dissolves scar tissue. I called and applied to be considered. The pain was getting worse; I ground my teeth so hard I chipped a tooth.

It was summer time, and things had slowed down. I was still doing facials, but no massage by hand. I had recently left the country club, and since I had my own office, I also had my Ashiatsu bars. The barefoot massage was my only option, and thankfully my clients loved it. Teaching Ashiatsu and Fijian massage was not a problem. But teaching the Bamboo massage was a challenge. My insurance had changed, and I was going to have to pony up $10K out of pocket. I prayed they would accept me into the clinical trial. And God answered my prayer with a yes. It would require me to drive 2 1/2 hours for the three months of treatment for a total of 11-trips. Only 75% of the patients received the actual drug; the rest received a placebo. Now I prayed to be the one of the 75%. God has never let me down yet, and this was not to be an exception. They numbed me for the first injection. It was a relief to be numb. The doctor carefully injected the Xiaflex into my shoulder. I then drove home. The pain was completely gone. Still thinking the numbing agent had not worn off, I went to bed and slept for the first time in months. When I woke up, the pain had not returned. It was then I knew I was one of the 75%. For the next month, my range of motion improved. I didn’t care, as long as I wasn’t in pain. After three months I had almost regained the full range of motion. It was a miracle.

Michelle D. Mace, CEO of The Barefoot Masters® a developer. She dedicates all CE’s (continuing education) solely to saving the hands and body of massage therapists. We offer live classes and online training with certification. Interested in live classes, click here.